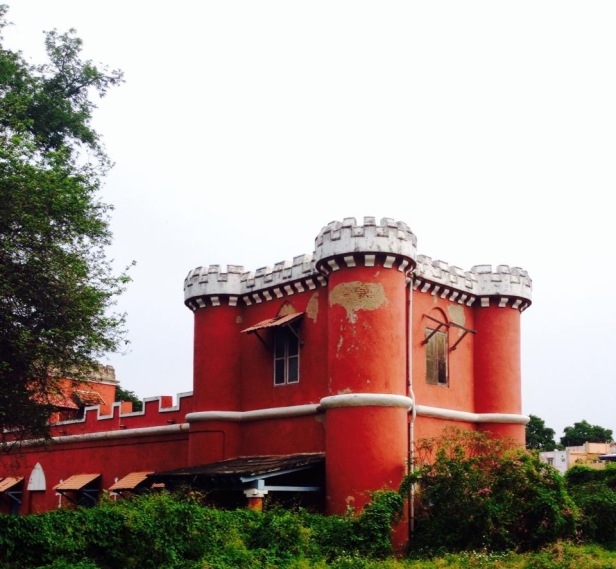 Which is the college after which College Road takes its name? Women’s Christian would be the most common answer though some have averred it is the Good Shepherd’s School. The correct response as any history buff will tell you, was the College of Fort St George, which functioned from what is presently the Directorate of Public Instruction (DPI) campus, between 1812 and 1854. In its time it was a great centre of learning, and one that would have an immense impact on the political history of what in 1947 became Madras State and later, Tamil Nadu. And yet, when you walk into that campus, from the towering archway that stands off College Road, you would be hard put to find any traces of that pioneering educational institution.

The campus is vast and fairly wooded. Dominating it is the old headquarters of the DPI itself, a white building in the neoclassical style and of indeterminate age, built probably in the 1930s. It has undergone many ‘renovations’, and in one of those many has lost all its commemorative plaques, if any were there in the first place. The many partitions, some temporary, some long-term temporary and some permanent, have made the place a rabbit’s warren of ugly rooms but it has a core of great grace – there is a central quadrangle at each of the corners of which are round towers that indicate that there was an earlier structure in the place of which the DPI building came up, as and when it was built. Could these be the remnants of the College of Fort St George?

There are other markers as well. As you enter the campus through the arch and walk straight ahead, with the Cooum to your right, you will come across a crenelated gatehouse with many shuttered windows and a central arch that leads you to the river. This is kept perpetually locked. As per S Muthiah, this was the ceremonial river entrance to the college, and Governors once sailed to it for convocations. This is an impressive structure, with a line of dentils forming an upper border to it, the tower block piercing its way through and culminating in an arched façade that has a bearded face carved on its keystone.

If this was not a puzzle enough, there is yet another intriguing structure, of an 1850s vintage at least, going by the number of arched windows that it has. This is to the rear of the DPI building and its gracefully curved and red-and-white façade is marred by an aerial walkway constructed in the 20th century to link it with the DPI building. And then we have the Madras Literary Society building, Indo-Saracenic with a lot of trellis work, and similar in design to the grander Connemara Public Library. This we are able to clearly date – the Journal of the Society of Arts for 1907 states that the 45,000 volumes of the MLS had recently moved to its new building.

In short, the College is now a lost landmark of the city and it remains for the rest of this article to highlight as to why it qualifies as a landmark. The College of Fort St George wasset up in Nungambakkam by the Company in 1812. A large parcel of what was known as Moorat’s Gardens, for this was the property of Edward Samuel Moorat, the fabulously rich but spendthrift son of Aga Samuel Mackertish Moorat, Armenian Merchant, was acquired to house the institution. Afacility where its servants could learn the Indian languages, it soon developed into a scholarly hub, where Indian teachers taught colonial students, thereby giving rise to much cultural interaction. A key figure in its development was Francis Whyte Ellis, who had come to Madras in 1796 as a Writer in the East India Company. He had risen steadily, becoming in 1810 the Collector of Madras. All the while, even as he focused on his work, Ellis studied Tamil and Telugu, becoming in the process an ardent admirer of Tiruvalluvar and his Kural.

This and his awareness of local traditions were to see him at his best in the final eight years of his life, for Ellis died when barely 42, of food poisoning/cholera while on a tour of Ramnad district. But the legacy of those eight years lives on. Ellis played an important role in the growth of the college, and ensured it began a publications wing. One of the books brought out was a Telugu grammar penned by AD Campbell, a protégé of Ellis. Writing the foreword to the book, Ellis for first time expostulated what is now known as the Dravidian proof – that Tamil, Telugu and Kannada had roots outside of Sanskrit. That evidence would grow under people like Bishop Caldwell and later acquire gargantuan proportions thanks to the Dravidian Movement in the 20th century.

The Tamil scholar Dr U Ve Swaminatha Iyer in his biography of his Guru – Mahavidwan Meenakshisundaram Pillai- notes that the latter came to Madras in 1839 and visited the college. The faculty for Tamil at that time was stellar to say the least – Thandavaraya Mudaliar, Madurai Kandasami Pulavar, Pu Nayanappa Mudaliar, Ramasami Pillai, Visakaperumal Ayyarand Mazhavai Mahalinga Ayyar. A later compilation in AR Venkatachalapathy’s excellent article in the book The Madras School of Orientalism (Thomas Trautmann -Ed) has names of other faculty members as well. In Swaminatha Iyer’s words, the principal task of the teachers here were to lecture and discourse on Tamil, get old works in the language ready for printing, prepare course material from older treatises in a more understandable form and translate books from other languages such as Sanskrit into Tamil and get them printed. The Thomas Trautmann compilation has yet another article, by Sylvia Vatuk on Islamic learning at the College which has names of several greats in Persian who taught here as well. Similarly, there were departments for Telugu, Canarese (Kannada), Malayalam and Mahratta. Strangely enough, there was also an Indian officiating as the English Headmaster of the College. In Ellis’ time this was Bomaconta SancarayaBrahman, ‘late Sheristadar of this Cutcherry,’ which means he had served as the clerk at the Madras Collectorate while Ellis was heading it.

Between them, the scholars here brought several pioneering works, too numerous to list here. Certainly the first dictionaries in various South Indian languages with meanings in English came from here. A random sampling over the years of working of the College would include Beschi’s Grammars, Chidambara Vadyar’s translation of the Uttara Kanda of Valmiki’s Ramayana, a Tamil Grammar by the same author, AD Campbell’s Telugu Grammar, Mamadi Venkayya’s Telugu Dictionary, J McKerrel’s Telugu Vocabulary, a Canarese Grammar by the same author, H Harris’ HindustaneeDictionary and the Rev Miron Winslow’s Tamil Dictionary.

At the end of the course of two years, all East India Company servants were tested in language proficiency – in conversation, in reading from business documents and translation. There were medals, and more importantly, hefty increases in salary. Those who stood first were entitled to 100 pagodas a month, while those who came second drew 75. The third class did not get any monetary benefits.

Several institutions that we recognise today as integral to Madras history came out of the College – the zoo, the museum and the Madras Literary Society. The last named, which operated as the library of the college and later became an institution in its own right, also ran a publication – The Madras Journal of Literature and Science – for several years. Many of the Board Members, Ellis and Campbell included, being ardent Freemasons, the premises also served as a Lodge. A record from the Masonic proceedings notes that the structure was not ideally suited for a secret society, for it was “much exposed and if closed insufferably hot”. By 1839, the Masons had moved elsewhere.

The College was closed in 1854 and the Government decided to put the property to other uses. From other records it is possible to glean that the Museum functioned from the main building for several years as did the Madras Literary Society. College Bridge House was residence of a series of judges of the High Court of Madras. With the Connemara Library and the Museum building being completed late in the 19th century, both the Museum and the MLS moved out, only to have the latter come back to the same campus in 1907. The main building became the home of the DPI, which in turn put up its present block in the 1930s. As to what happened to the rest of the college premises is a mystery. More of what remains will vanish soon for the DPI is not putting up a tasteless tower block at the rear of the campus.

This article is part of a series I write on lost and barely surviving landmarks of the city. You can read the earlier instalments here

6 thoughts on “The College on College Road”