Last week I was at the Bungalow on the Beach, run by Neemrana at Tranquebar and was most taken up by their collection of old clay dolls. I had a field day photographing them and musing on the provenance of some. Though they are mostly chipped with the paint peeling off, they have a charm that is all their own.

The ten incarnations of Vishnu are perhaps the first set that anybody acquires while going about starting a Kolu. Considering that this is a festival for Devi, where does he come in? The Lalita SahasranAmam has it that the ten incarnations emanated from the ten fingernails of the Goddess – karAnguli nakhotpanna nArAyaNa dasAkrutih. Muthuswami Dikshitar in his kamalAmba navAvaraNa   Series has this line in the 8th song, set in ghaNTa – karAngulinakhOdaya viShNudasAvatArE, which is why I am writing about this set of dolls today, the 8th day of navarAtri.

At home, my grandmother had a set formula for the Kolu – Ganesha was on the top most step. Durga, Lakshmi and Saraswathi came next. The dasAvatAram came third. We had a handsome set, now gone. I remember the Narasimha broke first. She also had a rosewood jewel box the top of which had a massive Padmanabha in ivory. The sides of this box had the dasAvatAram in ivory medallions. I have the box with the centrepiece but most of the medallions are now lost. I see many kolus now with bronze dasAvatArams, and also in brass. I personally like the wooden ones, from Andhra.

Our family home in Trichy has an intricately carved wooden panel in the front door frame. This is beautiful but my dad told me that when it was done nobody was happy with it as the Goddess was standing. Given Her fickle nature, it meant she would soon be on the move. That set me thinking. All the stone carvings of Goddess Lakshmi show Her seated, except when she is with Vishnu as an Ubhaya nAchiyAr. And yet, most pictures of the Goddess show Her standing. As She is in this statuette photographed at Radha Vasudevan’s Kolu.

The man who made us change our views was Ravi Varma, who in the 1890s first did Lakshmi for the Lakshmi Vilas Palace, Baroda. The model was probably Anjanibai Malpekar for whom the artiste carried a torch.

This pair has been around in our family for four generations. They are around 1.5 feet in height. My grandmother said they were painted this way as far as she could remember. The male is rather battered, having only half a pedestal and lost much of one ear. But they do make a striking couple. They have also always been clothed. One reason is, and I have seen them in the altogether and so I know, the male is rather lovingly carved with all details in the privates if you get my point, causing much giggles among the women in the family when they changed his costume.

Under my mom’s care, the female has become a somewhat brightly dressed creature, much bejewelled in a way I doubt any matron of Mylapore ever was. But she does look striking. I include this pair here because my grandmother had it that long before the arrival of clay dolls, wooden marapachis were what made a Kolu. Tirupathi for some reason was where the best ones were found. I have a Venkataramana-Padmavati in my collection too, around six inches in height.

When I took this photo, I had this Ravi Varma lithograph in mind

However I am mistaken. The clay frieze has Garuda as a man with beak and wings whereas Ravi Varma appears to have modelled his bird on something just hatched at a poultry farm. The costumes are similar. I would assume that the doll-maker used a combo of styles – the traditional Garuda sevai utsava murthy and the Ravi Varma. Incidentally, Rupika Chawla’s wonderful book on the painter does include this work. It however has a very similar one of Subrahmanya with consorts on the peacock. My grandmother still has a much sequinned version of the latter in her puja.

My private joke – the two consorts always remind me of passengers who are forced to sit on either side of the driver in a share auto.

No prizes for guessing what this commemorates. Between 1937 and 1940, India had its own Shirley Temple – Baby Saroja, who is now Saroja Ramamrutham. Born in 1931, she was catapulted to fame as the child star in three films – Balayogini, Tyaga Bhoomi and one more that I forget. There were picture postcards, matchboxes, soaps and all kinds of other things sold in her name. Dolls were yet another. The Wiki entry on her has some photos that you can see here.

I have met her briefly. What I loved about her was her complete simplicity and warmth. There are many child stars who grow up to be bitter people. Not Saroja.

Now where had I seen this before I wondered. The pose was so familiar. Was it some British period painting of an Indian dancer ?

And then I remembered this-

Who can forget AVMs Vazhkai in Tamil and its Hindi equivalent Bahar? Personally I find the 1951 film quite dated but the songs are an everlasting delight. I love the Hindi version in particular with its songs by Shamshad Begum. My personal favourites are Duniya ka mazaa le lo and Saiyan dil main aana re. Vyjayanthi was superb, particularly in the dance sequences.

Was the doll maker inspired? In the latter song Vyjayanthi strikes an identical posture at 1.04 . The costume however is more like what she wears in the first song.

For several years, Alamelu & Jayaprakash were tenants who occupied the ground floor of our house. Theirs was a joint family spanning four generations – Alamelu’s grandmother, her parents, she and her husband and their two daughters. A very friendly family and there was much coming and going between our homes. Their Kolu was a very aesthetic affair, the highlight being some age-old dolls belonging to Alamelu’s grandmother. My personal favourite was a set of seven friezes, depicting the seven kANDas of the Ramayana, all inspired by Ravi Varma’s series based on the same epic. The piece depicting Ravana fighting Jatayu even as he clutches Sita was a fabulous one in particular. The family took great care of their collection, all of which was in pristine condition.

Visiting Neemrana, I was reminded of all this when I saw this rather battered but still charming depiction of Rama, Lakshmana & Sita crossing the Sarayu. The boatman Guha has fallen off. From Rupika Chawla’s monumental and wonderful book Ravi Varma, Painter of Colonial India, gifted to me by my cousin Vyjayanthi Raman, I find that the original painting is now in a private collection. This was part of a series commissioned in the early 1900s, some of which are in the Mysore Palace and others in Laxmi Vilas, Baroda. I am reproducing a copy I found on the web: 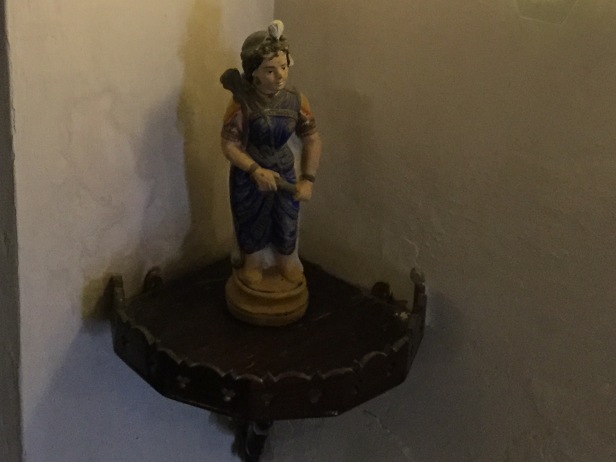 Alli – I guess there must be a pair to this one, an Arjuna. An old folk tale, it was made popular on stage by Sankaradas Swamigal who wrote the present version of Alli Arjuna. The story deals with the much-married Mahabharatha hero wandering into a kingdom where women call the shots. The queen is Alli. How he manages to woo her forms the rest of the story.

The costumes for these were chiefly inspired by 19th century dresses worn by Maharajahs and Maharanis. No bare-chested Arjuna. No Alli in a kacchai. Long ago we had in our house collection an Arjuna in a turban, an alpaca coat, churidars and patent leather shoes. He still carried a bow and arrow!

Many celebrated women artistes made a name portraying Alli. SD Subbulakshmi was one, as was KB Sundarambal. The latter, who was often paired with SG Kittappa, had a strange practice. If she appeared as Alli one day and Kittappa as Arjuna, they would reverse roles the next day!

By the 1930s, when Alli Arjuna made it to film thanks to AVM, Navaratri kolus were also transforming from the traditional marapAchis to clay dolls. Alli Arjuna were a popular pair. The doll in the photo was probably inspired by Kanthimathi Bai whom you see in the photo!

6 thoughts on “Some interesting #Navaratri dolls -#8”