For a moment I could have been in some little village in Italy. Turning a corner at Mylapore on my way back from the Velleeswarar Temple on Karthikai Deepam night, I was happy to note that the old and long-abandoned St Luke’s Church building on Mandaveli Street had received a coat of whitewash.

Is this something to do with the centenary of this building, which ought to be observed next year?

The church was built as a Wesleyan mission initiative and in 1947 became part of the Church of South India. Sometime back I had written about the sad state that the building was in, trees growing from the roof and windows in a state of collapse. The structure is one of the 400-odd buildings listed by the Justice Padmanabhan Committee as worthy of preservation. 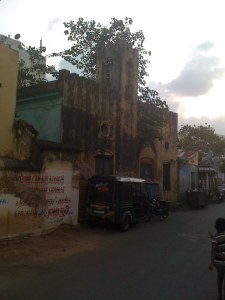 I am happy that someone has now given it this facelift. I also hope that whatever they do, they will not, in the name of preservation, embark on some unnecessary additions as has happened at St Teresa’s Nungambakkam. That church which was one of simple beauty, has grown into a monstrous replica of the Sistine Chapel, without the latter’s graceful proportions. This was after the original building was slated for demolition to make way for a modern church. That was stopped at the nick of the moment but nobody could prevent the subsequent ‘improvements’. I hope St Lukes survives as it is, an unpretentious but elegant edifice.

Who CE Early of Witney, England was, and why he laid the foundation stone is not clear to me. Google has it that he was a Magistrate in his town. The quality of mercy was evidently unknown to him. Sometime in 1935 he sentenced a young woman to three months at Holloway Prison for stealing a bicycle, a ladies bag and a coat, all valued at 6 pounds.

One thought on “Facelift for Mylapore Church”