This article appeared in a slightly edited form in The Hindu today. I am giving the unedited version below with a pic from the book cover. 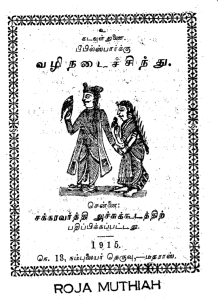 Guzili Pattu is the name given to a type of song by which news was disseminated in Madras city during the late 19th and early 20th centuries. They were printed on cheap paper and distributed in street corners and wandering minstrels sang them. Among the collection of Guzili songs available at the Roja Muthiah Library is the Vazhi Nadai Chindu published in 1915 by the Chakravarty Acchukoodam of 13, Nambulayar Street, Madras. The song is about a beau of George Town asking his girl, the toast of Mullah Sahib Street, to walk down with him to Mylapore to see the Arupathu Moovar festival at the Kapaliswarar Temple. The composition is structured as though the hero is pointing out the sights of the city to his beloved as they travel to Mylapore. The route however, is not the most logical and shortest.

The duo pray at the Ranganathaswami Temple (Mullah Sahib Street), the twin temples of Arunachaleswarar and Varadarajaswami (Anna Pillai Street) and the Dharmaraja Temple (Elephant Gate, Sowcarpet). Walking by People’s Park (known then as Victoria Gardens), he sings of the high compound and beautiful gates. The joys inside the garden are also described in detail. There is a pond (Lily Pond) with a wooden bridge over it. This was a very popular choice for family outings till the 1970s and some film songs have been shot there too! The song notes several women filling water from pipes. This was a novelty in 1915, for piped water supply from the Puzhal tank had just come to this area.

The zoo is described next (for it was then within People’s Park). They see male and female bears, a big tiger, a cheetah and what is sung of as “the famous” lion. There is a stone elephant kept in a tin shed for seeing which a gatekeeper charges ½ anna. Boat rides in the pond cost ¼ anna. More animals follow as does a large aviary with every bird imaginable. Describing the place as heaven, the couple then crosses the bandstand where English music is played for the “Durais” every Tuesday and Saturday in the evenings. People’s Park, according to the song also contained a tree whose sapling was planted by Prince Albert Victor (during his visit in 1889). The couple gazes at a lawnmower which can cut uniformly and then they marvel at a huge weighing scale used for sizing up the bales of grass. Attention is drawn to Overseer Willis’ bungalow inside the garden. From Pammal Sambanda Mudaliar’s memoirs we know that this Willis was also in charge of the Victoria Public Hall at that time.

The jail comes next and the duo claims to be able to see murderers, pickpockets and frauds going about doing their penitentiary duties. They also see the women’s cells and the gardens tended to by the convicts. Chintadripet Bridge is next and there is mention of the “Chitra Bungalow” of Murugappa Mudaliar. The duo crosses Sami Naicken Road (now a lane off Harris Bridge), which refers to Sami Naick, the man who pioneered vaccinations in Madras and who lived off Harris Road in Langs Garden Road. A park, much neglected, stands even now in Sami Naick’s name in that area.

What is the Arupatthu Moovar festival without the tanneer pandals where water, buttermilk and sweetmeats are distributed to those visiting the event? The man sings of a “Glass kaaran Tanneer Pandal” and then they are most likely on Mount Road for there is mention of a “Tailor Tachuvadi”, most probably Taylors Yard on which site later came up Dhun Buildings, Tarapore Towers and the post offices. They cross Ashton’s Shop (which was the name from the 1840s of the spot on Mount Road close to the Cooum River) and then enter Patters Gardens (now General Patters Road). Mention is made of Club House (later Express Estates and now the Express Avenue Mall), home to the Madras Club whose rear entrance they must have crossed and then they are standing next to a Taana Maada Koil, which could be the Wesley Church, for they say it is next to a school in Royapettah. Apparently Chellappa’s Sweet Shop was the rage of Royapettah for here the singer asks his girl to savour puri halwa, laddu, jalebi, adirasam, palgova and pagoda.

How they could walk after that meal is a mystery, but walk they do and crossing the Tandavarayar Tanneer Pandal (near the present day Kallukaaran Street, Royapettah), they move closer to Mylapore. Edward Eliotts (Radhakrishnan) Road is not mentioned, but they sing of a Prasanna Vinayagar Sannidhi and then the famed Ambattan (Hamilton) Bridge. Both still exist. The next sight is the Apparswami Koil and then Kosapettai (near the erstwhile Tanneer Turai Market and the Anjaneya Swami Temple). They then cross over to Mylapore’s tank and the Mada Street. The journey ends with a burst of devotion, for the names of the 63 nayanmars are recited and then a glorious description of Kapaliswarar and Karpagambal follows as the idols come out of the temple in all their finery.