I knew vaguely of the Royal Madras Yacht Club (RMYC) thanks to Venky Nayak, a friend of mine who once hosted a dinner at the club’s annexe which stands at an impossibly beautiful location – lands end, where the Cooum flows into the Bay of Bengal, just off the Napier Bridge and behind Flagstaff House. Of the RMYC’s main building, and the club’s 101 year-old heritage, I had only read of in Mr Muthiah’s writings.

A few weeks ago, I had a call from Gayathree Krishna (one of our heritage tour regulars) and Capt Vivek Shanbag, asking me if a sail from the harbour to the Gandhi Statue on the Marina would be of interest. This was a two-way commemoration – Madras Week and 101 years of the RMYC. I jumped at it.

The sail was held yesterday, with the club’s members setting off on speedboats and other craft (of which there was a bewildering array of terms and terminologies) and the guests going more sedately on a motorboat. This was the first time I had been inside the harbour. I was therefore blessed to be able to see the creation of Sir Francis Spring (the RMYC was also his baby) and the place where S Ramanujan, the great mathematician first worked. On display at the club building were newspaper clippings, trophies and photographs dating back to the 1930s. 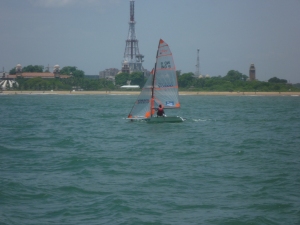 The sea was smooth according to the veterans but to us landlubbers it appeared rough enough. It was an interesting trip and we were able to see several landmark buildings from the sea, a view usually not possible unless we fly. What was tragic however is that the sea front along First Line Beach and much of North Beach Road (along Fort St George) is completely devoid of any land view, thanks to a whole lot of ugly port buildings that have come up. The mind boggles as to what tourism potential was missed. Imagine what a European capital or for that matter a Dubai or a Shanghai would have done with it. We returned by lunchtime.

The sail was preceded by a brief talk by me on the Port and Sir Francis’ singular contribution to its successful implementation. Then we had the christening of a boat by Chandra Lulla and Sarada,with a bottle of Sprite! The RMYC does not have a bar licence and so champagne was out of question.

Thanks to Gayathree, Capt. Shanbag, Nawaz Currimbhoy and Ramesh Lulla for putting together this out-ofthe-ordinary morning. The newspapers have covered it this morning:

2 thoughts on “Chennai, from the sea”